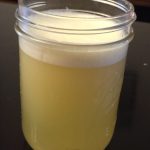 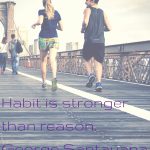 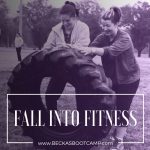 I did it again, hopped on the whole30 train. You can find a week worth of whole 30 recipes from one of my adventures last year here.

This time, I wanted to share my recipes from the whole month. One thing you will notice, I set myself up for success by eating the same things over and over during the day, and frequently having leftovers for dinner. This is not boring to me. I love food, and I enjoy cooking. It’s just the time and effort to make so many meals is not something I have in my day. It is so much easier to open the fridge and heat something up when I’m hungry. I also like the variety option. I may write down that I am having the lunch I made for the week, but I actually eat dinner leftovers. Or maybe I feel like having lunch instead of what I have for breakfast. I am going to list the meals as I planned for them.

I started on January 2nd, a Tuesday, as we had brunch plans at a friend’s house on the 1st. My friend is already super accommodating to my normal food needs, so I thought I would take the day to enjoy what she had prepared. That also meant I wasn’t home the day before I started to do much prepping of food.

Breakfast week one was the applegate chicken and apple sausage breakfast links with broccoli. I added some potato on more vigorous workout days. Lunch week one was leftovers and bone broth. 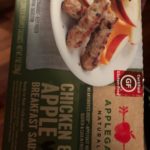 Dinner Tuesday was Thai Chicken with “Peanut” Sauce from Prevention. Wednesday was Salmon with mango salsa from Nom Nom Paleo. We had leftover salsa, so Mike added it to his eggs in the morning and I added it to my chicken sausage.Thursday was skillet beef fajitas from. Friday was paleo orange chicken from A Healthy Life for Me. 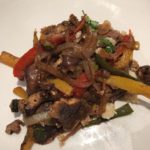 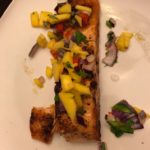 Saturday was planned as mexican meatball soup, but we ate leftovers instead. Sunday was planned leftovers, but I was at the hospital visiting Grandma, so we had Chipotle. I found week one, I had a lot of food left over, so I went into week two thinking I was good to go. Sadly, I found myself short on food week two.

Breakfast week two was the same, I really liked it. I also found myself eating the chicken sausage early in the morning, as I woke up hungrier than normal. Then I would eat the veggies later in the morning, at my normal breakfast time. Lunch was again leftover and bone broth. When I ran out of leftovers, my simple grocer meat order had arrived, so I had kalbasa sausage with sugar snap peas, and I added some chipotle avocado mayo with some lunches.

Dinner Monday was the mexican meatball soup from The Organic Kitchen. Tuesday was vegan cauliflower mushroom bowl from Food Faith Fitness. Wednesday was planned easy green chile tuna casserole, but we had leftovers instead. I had a lot of the mushroom bowl left, and the little ones weren’t fans so they just had quesadillas. (This, I realized later, was my downfall. I should of had half the casserole leftover for the rest of the week. Instead it didn’t ever get made). Thursday was leftovers, which essentially wiped me out of leftovers. Friday was skillet rosemary pork chops with potatoes and onions from Fast and Easy Whole30 book. I had leftover potato and onions that got added to other dishes later. Saturday was Meatballs with Potato and Broccoli from Fast and Easy Whole30 book. Sunday was again chipotle, as we were back at the hospital visiting Grandma. 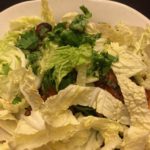 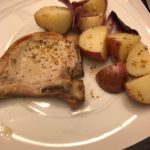 Breakfast week three was a brussel sprout, sweet potato, spicy breakfast sausage hash from The Real Food Dieticians. I prepared the easy tuna green chile casserole, from Cotter Crunch, on the weekend, so that was lunch starting Monday, with bone broth again. I also had leftover options too. I had ingredients to make chorizo stuffed mushrooms, but didn’t actually need them, so I waited to make them. 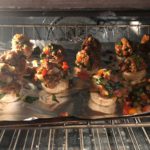 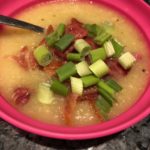 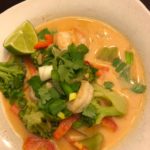 Week four breakfast is sausage, with the broccoli and carrots. Lunch is bone broth, leftovers, and the chorizo stuffed mushrooms from The Real Food Dietitians. Dinner Monday was prosciutto wrapped pork tenderloin from Laughing Spatula. The recipe called for 3-3.5 pounds, but I had a 5 pound tenderloin. So, Tuesday was leftovers instead of the salmon burgers. Wednesday is one pan chicken, zucchini, potato, and mushroom. I put olive oil and taco seasoning on all the cubed food, baked at 350 for 20 minutes. That way, I ate it with avocado, Grace with an avocado ranch, and Jack and Tyler had sour cream. Thursday was leftover night. Friday was Mushroom Bacon and Leek soup from So Let’s Hang Out. Saturday, my parents took the kids to a hamburger fundraiser, and I had leftovers with hubby. Then we went to Hamilton, where I broke my whole30 for a couple drinks, vodka with orange juice. Sunday, we cleared most the leftovers out of the fridge. I have only some of the taco chicken left for the week. 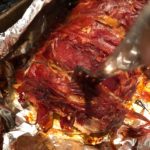 Week five is only a partial week. I had some chicken sausage and brussel sprouts for breakfast. I made kalua pig from Nom Nom Paleo for lunches, in addition to bone broth and leftovers. Monday dinner was the salmon burgers from Laughing Spatula. Tuesday was buffalo chicken chowder from Wholesomelicious. Wednesday was spaghetti squash with pederson farm italian sausage.

This has been a great experience for me this month. I have seen an increase in my focus and my energy. I know that have alcohol wasn’t the best cheat during the month, but I feel really good about how I did overall. My weight is not any different on the scale, but I feel that my stomach is flatter than it was at the beginning of the month. Being apple shaped, a flat stomach is pretty huge for me.

I am going to stay pretty clean in my eating. I know that I need to stay off gluten, soy, and eggs. I am going to try to limit my sugar intake, but I will use honey and dates to sweeten recipes. I have some Hello Fresh meals for dinner Thursday and Friday, and I’m excited to try them out. The one has rice, so I will be adding rice back into my diet. It also comes with soy sauce, but I will use my coconut aminos. I have some coconut wraps from Thrive Market, so I am going to try and hold off on the corn, and have them instead.

I think my favorite recipe from this month the Mexican meatball soup. It was so good. The loaded potato soup was really great as well. The breakfast hash was amazing, and so simple since the sausage came from Simple Grocer. As I write this, I’ve had a lot of soup this month! The mushroom bacon and leek soup was yummy, to me, as well. Grace loved the broth, and not the “things” in the soup. I did find that it didn’t keep me full very well. The meal that always surprises me is the kalua pig. It is just so easy, and so so yummy. I don’t order the Hawaiian salt online, I use a smoked sea salt instead of the salt and the liquid smoke.

If you have ever done whole30, I’d love to hear your thoughts and favorite recipes. If you have any questions or hesitations, feel free to ask them too.